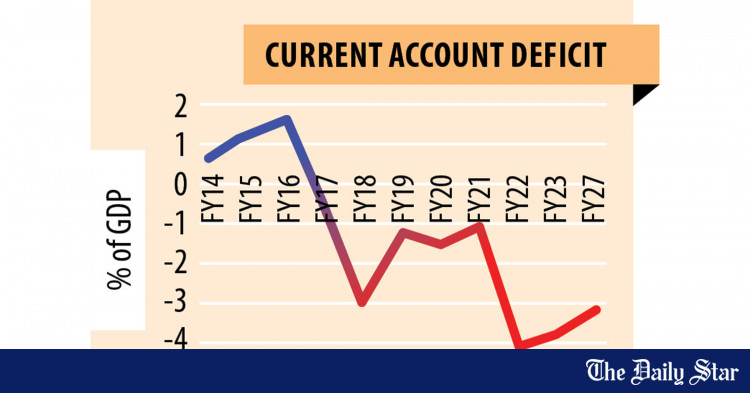 Current account balance: the deficit will remain high until 2027

Bangladesh will continue to run a high current account deficit until 2027, the International Monetary Fund predicts.

This indicates that the pressure on the country’s foreign exchange reserves is not going away any time soon.

For all the latest news, follow the Daily Star’s Google News channel.

The current account balance is part of the financial inflows and outflows of a country. This is part of the balance of payments, the record of all transactions made between one country and another, according to Investopedia.

And a negative balance mainly indicates a higher import value relative to exports and remittance income.

This caused foreign exchange reserves to fall from around $48 billion in August 2021 to $41.82 billion on June 30 this year. Reserves continued to fall and stood at $35.98 billion as of October 19.

Bangladesh’s current account deficit would be 3.2% in 2027, according to the IMF’s Global Economic Prospects report published on 12 October.

Earlier this month, the World Bank forecast the deficit to be 3.6% of GDP in the current fiscal year and 3.3% in the next fiscal year.

Economists say that Bangladesh needs loans as budget support from different multilateral lenders including the IMF to overcome this.

In July, Dhaka requested a $4.5 billion loan from the IMF in the form of budget support to shore up its depleting foreign exchange reserves.

An IMF delegation, led by its head of mission in Bangladesh Rahul Anand, arrives in Dhaka today to discuss the loan.

The team will discuss economic and financial reforms and policies with Bangladeshi authorities during their stay until Nov. 9, an IMF statement released on Oct. 21 read.

The team’s objective is to move towards staff-level agreement on a possible Extended Credit Facility/Expanded Financing Facility program and to access it under the new Resilience and Sustainability Facility in the coming months, according to the release.

Speaking to the Daily Star, Zahid Hussain, former chief economist of the World Bank, said the prices of different commodities, including fuel, had skyrocketed due to the Russian-Ukrainian war. International experts predict an economic recession due to high inflation, rising interest rates and market volatility.

“The economic impact of the war will continue this year. Our exports will suffer due to the global recession. This abnormal situation is expected to prevail until FY 2024-25.”

He mentioned that if a large balance of payments deficit persists, the pressure on foreign currency reserves will continue.

“The deficit, according to the projections of the World Bank and the IMF, would be around 15 to 16 billion dollars for this fiscal year,” he said, adding that the government can cope with the situation provided that he organizes foreign loans of 10 to 12 billion dollars as budget support. annually.

The government should prepare a comprehensive deficit financing plan for the next two to three years in order to be able to apply for loans from the IMF, the World Bank and other lenders such as the Japan International Cooperation Agency (JICA) and the Asian Development Bank.

“If the government can do that, the pressure on the reserves will ease.”

The government should have an appropriate exchange rate policy, Zahid said, adding that multiple rates for exports, imports and remittances would not relieve pressure on foreign exchange reserves.

Ahsan H Mansur, executive director of the Bangladesh Policy Research Institute, said the reserves were dwindling every month. Exports and remittances also fell in September. In such a situation, if the government can obtain loans from the IMF, it will help maintain macroeconomic stability.

He pointed out that the recent announcement of an IMF loan program for Pakistan has supported the exchange rate of its rupee against the US dollar.

“Our situation is not as bad as Pakistan’s. But we are not in a good position either…”

What is debt consolidation and should I consolidate?

In this information, from name and address to account balance; Will assist in the…

My brokerage account balance is low, but here’s why I don’t mind