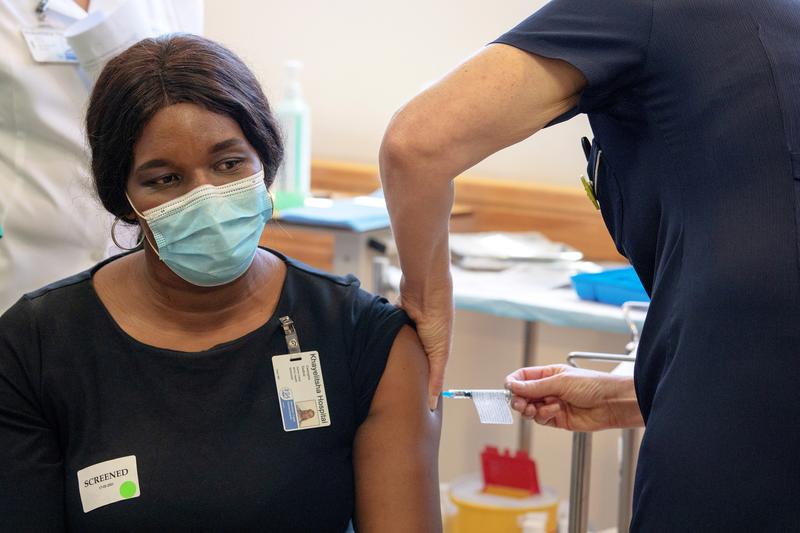 CAPE TOWN (Reuters) – South Africa could spend up to 19.3 billion rand ($ 1.33 billion) over the next three years to vaccinate most of its population, the Treasury said on Wednesday , in a “difficult balancing act” intended to contain COVID-19 while avoiding a spiral of debt.

The fiscal position of South Africa, which is the African country hardest hit by the pandemic, was already weak before the coronavirus crisis and has deteriorated sharply over the past year, according to the 2021 budget presented. in parliament.

The Treasury said a mass vaccination program would help boost GDP growth to 3.3% this year after a severe 7.2% contraction in 2020.

“This year we are facing an exceptionally difficult balancing act,” the Treasury said.

“On the one hand, a raging pandemic (…) on the other, a weak economy, with massive unemployment, burdened by ailing public enterprises, the highest budget deficit in our history and a debt rapidly growing public. “

The rand hit a 13-month high and bonds rallied after the budget announcement.

The Treasury has lowered its estimate of medium-term gross debt, but it remains relatively high – projected to 87.3% of GDP by 2023/24, from 92.9% estimated in October.

“Certainly, compared to last October, we are in a better place. But our assessment (…) still stands: our public finances are dangerously overloaded, ”Finance Minister Tito Mboweni told legislators.

Africa’s most advanced economy is battling a more infectious variant of the coronavirus, but richer countries have fallen behind in launching their vaccination campaign.

He now plans to step up vaccinations after administering the first doses of Johnson & Johnson’s vaccine last week.

The government plans to vaccinate 40 million people, or two-thirds of the population.

The budget allocates R 1.3 billion for vaccine purchases in the current fiscal year, which ends next month, while R 9 billion is earmarked for medium-term deployment.

“Given the uncertainty surrounding the final costs, it is estimated that R 9 billion could be drawn from the contingency reserve and emergency allocations, bringing the total potential funding for the immunization program to around R 19.3 billion. rands, ”the Treasury said.

To support the economy, the Treasury did not provide additional tax revenue in the medium term, removing previously proposed tax measures of 40 billion rand.

The Treasury has also planned to reduce local currency bond issuance as it uses more of its existing cash balances.

To increase revenue, fuel taxes will increase by 27 cents per liter, while an 8% increase in excise taxes on alcohol and tobacco products would be implemented.

The civil servant pay freeze put the government on a collision course with public sector unions, which challenged in court the government’s non-payment of increases in April, as agreed in a 2018 wage deal. Labor appeals court ruled in December in favor of the government.

The Civil Servants Association said last month it is challenging the ruling in the Constitutional Court.

“The biggest risk remains the wage bill, which has yet to be negotiated. This is where we have the least hope, ”said Danelee Masia of Deutsche Bank.

Mboweni said the government is working to achieve fair public sector pay when negotiations with unions on a new multi-year wage deal begin later this year.

Adding to the pressure on spending, the budget allocated R31.7 billion to struggling utility Eskom for 2021/2022, while the Land Bank, which supports farmers, received R5 billion in 2021/22 and R 1 billion in each of the following two years.

BNPL Industry Consolidation: What Does It Mean?