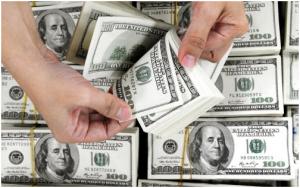 Much attention is being paid to how the seasonal factor of large-scale foreign dividend remittances will affect South Korea’s current account balance and exchange rate.

On April 12, the won-dollar exchange rate rose 3.7 won to close at 1,124.9 won to the US dollar. The rate rose for the third day in a row with foreign shareholders of companies whose fiscal year ended in December is about to send their dividends to their home countries.

According to financial data provider FnGuide, their cash dividends for the last fiscal year are estimated to have increased by around 40% based on an increased payout ratio. Above all, those of Samsung Electronics soared due to its special dividend of 1,578 won per share. The company’s total dividend is 13,124.3 billion won, and foreign shareholders amount to 7,743 billion won. For reference, the latter was 1.44 trillion won a year ago.

In addition, the dividend to foreign shareholders in 15 large corporations is approximately four trillion won, of which 480.6 billion won in KB Financial Group and 423.2 billion won in SK hynix. Upward pressure on the won-dollar exchange rate is inevitable in large-scale trading.


South Korea’s April exchange rate rose for the fourth year in a row up to 2020. In April 2019, the rate jumped 3% to 1,168.2 won to the US dollar. In April of last year, the rate didn’t change much as it climbed to 1,285.7 won in March due to the COVID-19 outbreak, and then South Korea struck a deal to currency exchange with the United States.

Recently, foreign investors have sold many stocks in the South Korean market for two consecutive sessions after their net purchase which began this month. Meanwhile, South Korea’s growing exports defend the value of its currency. The value of the US dollar shows little change as the rise in US Treasury yields slows.